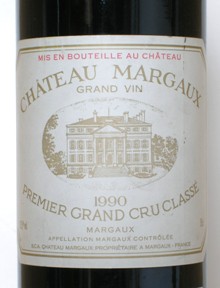 "For me, the 1990 Margaux continues to be the quintessential example of this chateau. In addition to being profoundly concentrated, its ethereal bouquet of sweet black fruits, cedar, spices, flowers, smoke, and vanilla is remarkably well-formed and intense. In the mouth, there is not a hard edge to this classic wine, which is super-concentrated, soft, silky-textured, and opulent. It displays an opaque ruby/purple color, a compelling bouquet, and exquisite layers of flavors that cascade over the palate without any notion of toughness or coarseness. The acidity is low, although sufficient enough to provide vibrancy and focus. This wine's significant tannin level is remarkably well-concealed by the wealth of fruit. Although still an infant in terms of development, this fabulous Margaux is already drinkable. There have been so many great vintages of Margaux under the Mentzelopoulos regime that it is almost inconceivable that the 1990 could outrank the 1982, 1983, 1985, 1986, and 1995, but, in my opinion, it possesses an extra-special dimension. While it is approachable, it will last for 25-30 years." Robert Parker 100, February, 1997